The Omicron wave’s overall impact on economic revival was much lower than initially thought. Though IMF has downgraded the GDP growth forecasts in the latest WEO vs. the earlier one, they are still above -trend levels instilling confidence in the recovery.

The Omicron wave’s overall impact on economic revival was much lower than initially thought. Though IMF has downgraded the GDP growth forecasts in the latest WEO vs. the earlier one, they are still above -trend levels instilling confidence in the recovery. Given the mildness of this variant, Denmark and Spain have declared Covid a flu, like any other, in essence, terming it an endemic. But geopolitical tensions seem to have filled in the space vacated by the virus, with Russia-Ukraine military action at the center of it. Escalated armed conflict may see an array of sanctions placed on Russia, with potential sudden interruption of energy supplies, especially to Europe. Moreover, a pronounced oil price shock, wherein Brent crude surges to USD 150/barrel in 1HCY22, may see global GDP growth drop sharply, estimates JPM in a report. However, we believe the Omicron shock would depress GDP only for the 1Q of CY22, post which reopening of services, easing of supply chains, and price pressures should ensure a return to pre-pandemic levels of activity.

*Assumes that Brent crude surges from the current level of USD 85 per barrel to USD150 over 1Q22. Source: JP Morgan, LGT, January 2022

GLOBAL EQUITIES: LETTING THE AIR OUT

Persistently high inflation, tightening financial conditions, and rising hostilities in Eastern Europe roiled markets, leaving investors no place to hide. A sharp increase in VIX rekindled memories of the 2013 taper tantrum. MSCI DM closed 5.3% lower MoM for Jan-22 underperforming MSCI EM. Richly valued growth stocks came under immense selling pressure due to the US Fed’s hawkishness and sudden investor awakening that the super-normal growth of pandemic years is unlikely to be repeated in the future. Largest US OTT and home gym equipment companies missed the street’s estimates, which sent their prices crashing. The shockwaves were felt by their expensive tech peers and drove the NASDAQ down by 10%, i.e., into a correction in market parlance. On the other hand, a flare-up in oil and gas prices and the upswing in bond yields put energy and financial sectors on the pedestal. As a result, MSCI Value (down 1.2%) posted the largest monthly outperformance vs. MSCI Growth (down 9.3%) in more than 20 years. We retain our tactical OW stance on the US and Japan with Neutral on Europe. Asia ex-Japan and EMs are least preferred. 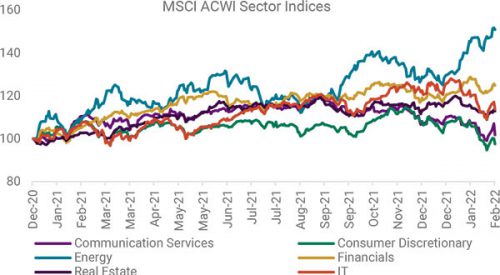 A single rate hike expectation in 2022 from the US Fed three months back to five now says something about the nature of the inflation beast. Powell mentioned that the US economy is better than before the 2015 hiking cycle, specifically concerning labour markets. The pace and timing of Fed’s QE – rate hikes – QT actions would affect global capital markets. BOE went ahead with its second successive rate hike of 25bps even as 4 out of 9 members demanded a 50bps move. Record high inflation led by energy and food prices spooked the ECB as it removed the word “unlikely” for rate hikes in 2022. Out-of-hand inflation is damaging economically and politically and regaining control over it usually requires a deep recession. Only time will tell if central banks fell way behind the curve and if their hasty actions now could crumble the momentum building in the economy. Retain OW on HY relative to IG and Sovereign bonds, but as HY spreads have narrowed sharply, investors could look at low beta long-short equity funds and zero beta market neutral products.

Crude oil prices went above USD 90/barrel for the first time since 2014 as it posted gains of 26% in the last seven weeks. Tight supplies but strong demand led by fading Omicron worries and snowstorms on the US East Coast together with Russia -Ukraine and UAE/Saudi-Yemen aggression are behind the latest upheaval in the energy (oil and gas) basket. OPEC+ have increased production by the usual 400k bpd for Feb- 22, but an oil supertanker explosion at Nigeria coast and Libya halting exports due to weather has further fueled the run- up in prices. Goldman Sachs, IHS Markit, and JPM forecast prices could hit USD 100+/barrel before 1HCY22. DXY and interest rates trending higher could hurt Gold, but it could find support as an inflation and risk hedge. We turn tactically Neutral on Gold as technical charts are also showing consolidation.

Oil deficits for past 5 quarters have led to “Boiling Oil”

Even as India is still in its 75th year of Independence, the Budget outlined the path for India @ 100 with a more profound emphasis on sunrise sectors like renewable energy, electric mobility, and new-age infrastructure development. Capital expenditure is budgeted at INR 7.5tn (+25% over FY22RE), supporting economic growth, job creation, boosting incomes, and providing confidence to the private sector. However, the Fiscal deficit of 6.9% for FY22RE appears conservative, considering the strong tax buoyancy. As a result of these measures, India is expected to clock real GDP growth of 9.2% YoY in FY22 followed by a healthy 8-8.5% YoY in FY23 – highest among major economies – led by long-term benefits flowing from these reforms, high levels of vaccinated population and government capex crowding-in private capex. While the government has been unable to meet its FY22BE disinvestment target, it has projected a more achievable number for FY23. Overall, the Budget was growth-focused and continued to progress on the path of credibility and transparency that it has showcased in the past few years.

Indian economy witnessed a broad-based slowdown in Jan-22 across different segments due to Omicron disruptions. The steep spike in cases across the country led to the imposition of localised restrictions. As a result, India’s Composite PMI declined from 56.4 in Dec-21 to 53.0 in Jan-22, witnessing the slowest expansion rate in the last six months. Both manufacturing and services activity increased at weaker rates. These moderations were also evident from the modest 2.6% increase in power consumption, with local restrictions affecting industrial and commercial demand. However, GST collections came in at a healthy INR 1.41tn, the highest mop-up since GST implementation. The auto industry volumes reported a mixed performance, with PVs and CVs performing relatively better than 2Ws and Tractors.

No longer a part of Fragile Five: Exports have been growing at robust pace; FX reserves are the 4th highest in the World

Global developments impacted Indian indices primarily seen in the decimation of new-age tech stocks, which fell by 40-50% from their recent peaks. It had a domino effect on highly profitable cash rich companies as well. But when the “ship is sinking, everyone jumps,” and that’s what transpired in the equity markets. Volatility shot up, and portfolios were bleeding deep red in a matter of five consecutive sessions. However, the index did not go through the same pain as the stocks. 264 companies (53%) of Nifty 500 that have announced 3QFY22 results have reported revenue growth of 24% YoY. Still, EBITDA grew only 8.5% YoY, showing the impact of commodity price inflation and the inability to pass on price increase with consequent margin pressure. On the other hand, PAT growth has been much better at 21% YoY. The tumult from the upcoming critical state elections and central bank actions would offer opportunities to buy the dips and build portfolios. The timing of market selloffs and whether they happen pre-or post-event is challenging to anticipate, and hence, sticking to asset allocation is always the most prudent strategy. We retain our tactical OW stance on Equity vs. Bonds placing confidence in improving macro-outlook and healthy EPS growth. We also keep OW on Large-caps vs. Mid-caps as relative valuations and momentum indicators favour Large. Investors can take satellite positions in short-term thematic prospects with a 6-12-month view.

Equity Breadth has come of the peaks – exuberance has moderated

Indian Bond yields have been inching higher, driven by the global central bank’s monetary tightening to deal with multi-decade high inflation. RBI has had to devolve issuances onto primary dealers in recent G- Sec auctions as market participants demanded higher yields. The absence of RBI in the form of OMO/OT, higher than expected FY23BE gross borrowings, and silence on steps taken towards the inclusion of Indian sovereign bonds in major global bond indices, led to the spurt in 10Yr G-Sec yields by 23bps from intraday low to 6.88% on Budget Day. RBI so far has been focused on liquidity normalisation. RBI could consider hiking abnormally low policy rates once economic recovery becomes broad-based. The MPC outcome on 9-Feb-22 will throw more clarity. Unending Govt. bond supply was constantly weighing heavy on G-Secs and has been our primary thesis for preferring good-quality Corporate Bonds / Funds adopting a barbell investment strategy to address volatility and duration risk. Going into FY23, high inflation, liquidity tapering, and fiscal deficit concerns would keep pressure on bonds, especially G-Secs.

The US Fed has generated enough noise about tapering, and Mar- 22 now could form the psychological time barrier for most currency market participants. Already, the yield differential between US and DM bonds is attractive. The Dollar Index has also shown strong re-rating from mid-month lows in Jan -22 towards fair valuation vs. its basket. Simultaneously a pro-capex (and that too on the balance sheet) Indian Budget, while not having strained the fiscal deficit commensurately to that extent, spook the Indian bond markets, which could have some weakening rub-off on the INR. While FII flows into India could resurge post four months of persistent outflows, also drawn in by the LIC IPO (planned before FY22 end), we still turn OW on the USD from Neutral earlier.

Dollar Index reaching towards fair valuation of 100 vs. its basket

Source: Bloomberg Equity/Fixed Income Returns/Yields in local currencies. Commodities in USD. Numbers for Fixed Income are Yields. As of January 31, 2022.