In the fight between Russia and Ukraine, global growth has succumbed. Central
banks are also waging war against inflation, crucifying growth.

GLOBAL MACRO: IN SEARCH OF GROWTH

In the fight between Russia and Ukraine, global growth has succumbed. Central banks are also waging war against inflation, crucifying growth. Supply chains have just begun to re-synchronise, as is evident in the falling prices of goods. Still, services inflation has continued to soar, prompted by pent-up reopening demand, rising wages, and a shortage of skilled workforce. To hide their failures and return to mandated inflation, policymakers (read US Fed, BOE) have aimed their guns at this demand. Therefore, the risk of recession in the US, UK and Europe has increased over the past couple of months. German economy could be in grave danger of capitulating as its natural gas stock could dry out by the end of this year due to sanctions imposed on Russian supplies. High energy and food prices supplemented with high mostgage costs could overwhelm the record household savings accumulated during the pandemic. Consumer sentiment has soured further, as seen in the University of Michigan survey, which shows weak durable goods buying conditions. But China emerged out of the lockdown and announced a 33-point agenda to achieve the 5.5% growth target for 2022. It looks like the one who pulled the world into an abyss will only have to pull it back out.

GLOBAL EQUITIES: NO PLACE TO HIDE

Equities had the worst first half since 1970, with all major indices dropping more than 15% except for UK and Japan. The steep fall has made stocks cheaper but not cheap enough, particularly those classified as growth. Analyst’s EPS estimates are still showing double-digit growth and PAT margin forecasts above pre-pandemic averages, despite slowdown fears on the horizon. However, a strong US dollar and rising borrowing costs could spoil the upcoming earnings season. Management guidance for 2H22 and CY23 would take center stage as investors deal with the volatility at the stock level witnessed in the last quarter. Amidst all the negativity, FIIs have exited in droves from EMs, with the outflows consequently depreciating the local currencies. We retain our tactical OW stance on Equities vs Bonds with a preference for stocks with dividend yield support (including REITs). Also, we favour large-cap market leaders over small-cap stocks with promise of growth and businesses exposed to corporate expenditure over consumer expenditure. We maintain our tactical OW stance on the US, Japan and UW on Europe, Asia, and EMs.

Words were followed up with actions from central banks globally. At its Jun-22 meeting, the US Fed did what many thought unthinkable. It raised the Fed Funds rate by 75bps – a step it has never taken since 1994 – to combat unwieldy inflation. Powell also defined the rate trajectory clearly by sharply lifting the year- end targets to 3.4% (2022), 3.8% (2023) and 3.4% (2024). But the SNB’s decision to front-run the ECB was the ultimate surprise. SNB hiked policy rates by 50bps before the ECB’s scheduled Jul-22 meeting, where it has guided for the first rate hike in eleven years. But rising spreads for PIGS economies have rekindled fears of the 2011 sovereign debt crisis, putting Lagarde in a dilemma. Financial markets seem to have already priced in the interest rate turnaround as OIS curves signal rapidly rising rates in the US and Europe. We favour short-duration IG bonds over HY bonds and stay UW on Sovereigns. We prefer to extend the duration when the US 10-year Treasury yield is >3.25%.

Industrial metals and agricultural commodities have seen a meltdown over the last three months on recession fears. Vital industrial metals like copper, zinc, aluminum, and soft commodities like wheat, closely linked to inflation, have faced price erosion. Natural gas has also dropped from its peaks, posting the worst month in more than three years. Even energy, especially crude oil, has witnessed a meaningful decline. Although we remain constructive on Gold from a medium to long-term view, in the near term, technical indicators show some pressure, with gold trading below 200 DMA and MACD moving negatively. Thus, we are turning one notch underweight on Gold vs Cash.

Commodity prices have seen a steep fall from their recent peaks 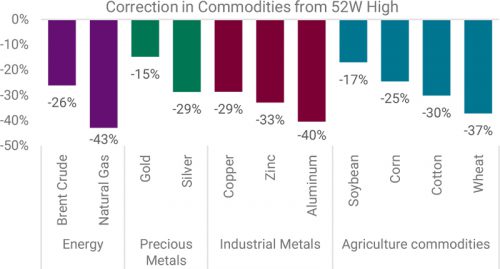 INDIA MACRO: ON THE PATH OF RECOVERY – STORY REMAINS STRONG

India will still be the fastest growing amongst large economies despite FY23 real GDP growth forecast downgraded from 7.8% to 7.3%. The FY23 CAD is expected to increase to 3-3.5% of the GDP driven by elevated commodity prices. To control the widening CAD, the import duty on gold has been raised from 10.25% to 15%, while the customs duty on gold has been raised from 7.5% to 12.5%. Further, around USD 12bn in windfall taxes on domestic crude oil production and fuel exports have been imposed, which will soften the impact of the excise duty cut on fuel. On account of these taxes, Indian oil companies will shell out INR 6/litre on exports of petrol and ATF, and INR 13/ litre on exports of diesel. In addition to the tax buoyancy expected this FY, the 5G spectrum auction of INR 710bn is likely to contribute to the government’s coffers. GST collections for Jun-22 were INR 1.44tn – above INR 1tn for 12 months in a row. GST compensation cess levy has been extended by four more years till March 2026, to recompense for the liquidity support given to the States during the Covid-19 pandemic.

Composite PMI for the month of June was 58.2, while Services PMI rose to 59.2 in Jun-22, compared to 58.9 in May-22 as there were improvements in demand and capacity expansions. The chip supply issue seems to improving too, which has resulted in strong demand for passenger vehicles however 2W demands remains under pressure. The current Monsoon season must be watched closely since the Jun-22 rainfall was 92% of the LPA. However, rainfall in July-22 is expected to be normal, supporting the lagging pace of the Kharif acreage as the monsoon progresses.

With the equity market correction continuing in June, trailing and forward PE valuations have become attractive relative to historical averages. MSCI India to MSCI EM premium and Market Cap./GDP ratio has fallen from the recent peaks but is still elevated. Given the extremely weak market breadth and bearish sentiment, the time is ripe to become greedy. The VIX index (fear gauge) has been trending higher MoM primarily due to global cues. FII’s relentless selling has now led to CYTD22 outflows offsetting the cumulative inflows of the two pandemic years of CY20-21. Interesting to note is much of the index price fall has been led by PE de-rating and less by EPS downgrades. That can change with the 1QFY23 results season beginning this week. Investors must leave the EPS estimates game to analysts and instead focus on building strategic core portfolios with high-quality companies available at good entry points. Corporate profitability to GDP ratio is expected to rise from hereon, led by multiple macro variables like China+1, import substitution, and PLI-led Capex, among others. We retain our Overweight on Equity vs Bonds as growth-inflation dynamics continue to favour Equities. We turn Overweight on Large vs Mid-caps as valuations are now looking better for the former, along with support from momentum indicators like daily trading activity.

On 8-Jun-22, the MPC unanimously voted for a 50bps hike in repo rate and change in stance to “focus on withdrawal of accommodation”. RBI noted that upside risks to inflation had manifested earlier than expected. Thus, it revised its CPI forecast sharply upwards from 5.7% to 6.7% while retaining a growth forecast of 7.2% for FY23. The bond yields spiked steeply post the meeting, though RBI reiterated its commitment to orderly completion of the government borrowing program. MPC minutes revealed that members were less hawkish than their global counterparts indicating that monetary policy action could be moderate compared to the rest of the world. Governor also stated that the recent fuel tax cuts had reduced inflationary expectations over the next 3–12- month period. As a result, RBI may not hike rates aggressively in the future. RBI FSR assessed economy remains on the path of recovery, though inflationary pressures, external spillovers, and geopolitical risks warrant careful handling and close monitoring. It also said that the banks and NBFCs have sufficient capital buffers to withstand severe shocks. We prefer Corporate Bonds / Funds adopting a barbell investment strategy to address volatility and duration risk, given the massive budgeted G-Sec borrowing and expected interest rate hikes. RBI’s various tools have led to a gradual withdrawal of the surplus systemic liquidity and bear flattening of the yield curve, making us turn Neutral between ST and LT from a duration perspective.

CURRENCY: INDIA PITS ITS NEMESES AGAINST EACH OTHER; UP OW ON USD

The INR has been at the receiving end vs the USD, as has been the case with most currencies. The INR has further room for depreciation as REER still paints a 2-3% over-valuation. GOI has implemented a slew of restrictions/duties on exports in a bid to tame the inflation monster. But, this has awoken the old demon of trade deficit now looming large again. India has chosen fiscal levers to counter inflation and indirectly dictated the monetary policy of FX intervention for stabilizing the INR to take a back seat. This allows the weakening INR to cushion the once-again burgeoning trade deficit. The impact of RBI’s several measures announced to attract foreign flows and break the INR downslide will be evident in the coming days. Net-net, one-notch more positive on the USD.

India’s trade deficit widened to a record high $25.6bn in Jun-22. A 2- 3% fall to fair value in India’s REER should help offset this

Source: Bloomberg Equity/Fixed Income Returns/Yields in local currencies. Commodities in USD. Numbers for Fixed Income are Yields. As of June 30, 2022.