With so many political superpowers having vested interests in the ongoing Russia-Ukraine war, calls for a diplomatic solution have often been countered with the need for more military action.

With so many political superpowers having vested interests in the ongoing Russia-Ukraine war, calls for a diplomatic solution have often been countered with the need for more military action. Unfortunately, there seems to be no sign of a resolution and “what is the endgame?” remains the top question on everyone’s mind. As a result of evolving variables, the global economic recovery faces significant downside risks. EMs are relatively more susceptible to this vortex of factors than DMs, as persistent inflation and outflow of capital will put downward pressure on the currency and render debt profiles vulnerable. Labour markets continued to tighten as unemployment levels fell to the lowest. 2 But with multi-decade high inflation, real wages remained negative. Other high- frequency indicators were mixed – UK consumer confidence hit bottom, and business surveys also softened markedly, pulled down by services, but Europe showed some improvement. US housing sales showed moderation even as China’s gradual reopening raised hopes of a revival picking up pace. One can only take solace because past wars have led to remarkable innovations, and human ingenuity has helped survive even the worst of crises.

Global Equities saw a historic sell-off YTD that led to the worst start for the asset class in 100 years. A few indices are technically into bear territory as they are down >20% from their recent peaks. Some end-of-month relief rally spurred by dovish US Fed minutes, signs of US inflation peaking and easing mobility restrictions in China aided some indices to close flat. Value stocks performed the best, whereas Growth stocks struggled due to valuation compression and profit warnings from several prominent companies. UK FTSE 100 is the only equity index to yield a positive YTD return supported by higher exposure to the energy sector. The lack of a clear near-term catalyst will likely keep investor sentiments subdued, and VIX elevated. We retain our tactical OW stance on Equities vs Bonds with a preference for stocks with dividend yield support (including REITs). Also, favour large-cap market leaders over smaller-cap stocks with promise of growth and businesses exposed to corporate expenditure rather than consumer expenditure. We maintain our tactical OW stance on the US and Japan and UW on Europe, Asia ex-Japan and EM ex-Asia.

CY22 has seen the worst start for Equities in 100 years

The risks of high inflationary expectations getting entrenched have forced countervailing monetary policy action at a time when supporting economic recovery should have been assigned priority. By 2022 so far, more than 40 central banks globally have hiked rates or scaled back liquidity. Policy trade-offs have become more complex, and tail risks loom large in several countries, including stagflation. Financial conditions have already started to tighten alongside the negative wealth effect. US Fed’s tone also progressed from being hawkish at the month’s start to being slightly dovish towards the end. The solid jobs report puts the central banks in a catch-22 situation as they must ensure the economy has a soft landing, not hard, i.e., avoids a recession. We favour short duration IG bonds over HY bonds and stay UW on Sovereigns. We prefer to extend the duration when the US 10-year Treasury yield is >3.25%.

The recession question likely won’t have an answer until 2HCY22 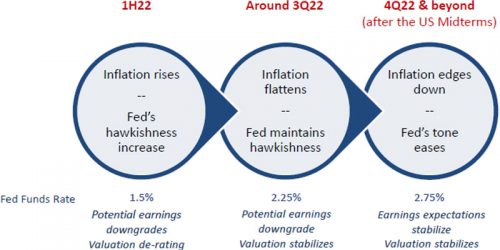 Food nationalism came to the fore as Indonesia and India banned palm oil and wheat exports amidst worries of domestic price rise. Europe embargoed Russian seaborne Oil (not pipeline), which could risk gas supplies from Russia to Europe. Gas prices for winter futures contracts held steady at elevated levels. OPEC+ alliance agreed to accelerate its production hikes through the summer, with quotas now rising by 648,000 b/d for Jul-Aug-22. Crude Oil was +13% MoM. Coking coal prices are down by USD 100/ton from recent peaks. The uptick in real estate in China, coupled with the policy of keeping the country’s steel production under control, should bring back focus on ferrous metals. Even as risk-off sentiments and inflation offset rising DXY and interest rates, we turn Neutral on Gold, mainly as technical indicators show a reversal in momentum. 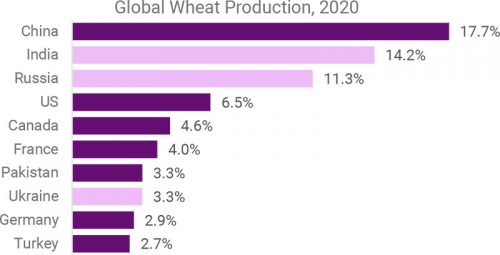 India’s Real GDP data indicated a growth of 8.7% in FY22, slightly lower than the previous estimate of 8.9%. FY22 fiscal deficit came in lower at 6.7% vs BE of 6.9%, aided by higher Nominal GDP, buoyant tax collections and dividend and spectrum receipts also supported non-tax revenues, which came in higher than RE. However, on the disinvestment front, the government faced another setback, with most bidders for the 53% stake in BPCL expressing their inability to further participate in its privatization. Following the RBI’s measures to tame inflation, the government reduced excise duty on petrol and diesel while hiking the export duty for steel, put a cap on sugar exports and a ban on the export of wheat. Amidst the economic and political turmoil plaguing India’s neighbours on all borders, the Indian economy is relatively better placed in South Asia to strengthen the current recovery and improve macroeconomic prospects in the future. India is not only the best alternative to Russia and Ukraine for food security but also a significant beneficiary of China+1 for manufacturing.

Composite PMI rose from 57.6 in Apr-22 to 58.3 in May-22, signalling its fastest expansion rate since Nov-21, led by Services output amid increasing cost pressures. GST collections moderated to INR 1.4tn in May-22, but well above the INR 1tn mark for 11 consecutive months. The Auto industry recovered partially in May-22, once again led by PVs, CVs, and tractors, while the 2W remained subdued. While there have been concerns over the revival of rural demand, the IMD’s upward revision for the southwest monsoon season to 103% of the LPA and expectations of a normal monsoon are encouraging.

GFCF and New Capex are back to Mar-20 levels, led primarily by Government capital expenditure

Equities took the “Sell in May and Go Away” phrase quite seriously, led by the risk-off sentiments brought on by Russia’s invasion of Ukraine and global central bank’s hard stance on liquidity tightening. RBI’s off-cycle rate hike came as a shocker and pulled down the Indian markets, wrecking investors’ portfolios. At the lowest point in the month, Nifty-50 was down ~15% from the Oct-21 peaks but outperformed EM peers and many DM indices. Investors need to realise that Equity investing is a game of patience and conviction over a long time, and such corrections offer great opportunities. Also, excessive valuations reverting to mean led by rising bond yields are the primary reason behind the current fall. However, earnings have been resilient and are forecasted to exhibit >15% CAGR over FY22-24 vs single-digit CAGR of last decade. Timing the markets is futile as no one can predict the troughs and peaks with certainty. Hence, strategic asset allocation must be at the core of investor portfolio constructs. We retain our Overweight stance on Equity vs Bonds as we believe the current growth-inflation dynamics support the former. We maintain our tactical Neutral stance between Large and Mid-caps as the higher EPS growth for Mid- caps balances out the improved volumes for Large-caps. Absolute trailing and forward PE valuations for both are cheaper than short-medium term averages, though breadth has also fallen 2/3rd from the recent highs.

Last month, the RBI initiated its rate-hike phase to avoid falling behind the curve and slaying the inflation monster. Though OIS curves indicate 50-180 bps repo rate hikes over the next 3-12 months, the hiking cycle this time around could be short and shallow given the external risks to growth. Headline CPI at an 8-year high of 7.8% and WPI at a 17-year high of 15.1% also jolted the government into action, as inflation has a dubious track record of overthrowing incumbents. Tax and duty changes were announced to rein in domestic inflation and ensure local demand is not hampered. But these same moves and the earlier declared food and fertiliser subsidies could now put FY23 BE for a fiscal deficit of 6.4% at risk. The government expects tax buoyancy and non-tax receipts to offset the increased outlays and, hence, has not planned additional borrowings, but this could be an overhang on the G-Sec yields. To provide some respite to the long end of the yield curve, the RBI could resort to Operation Twists. Given the enormous G-Sec issuances lined up and successive interest rate rises soon, Corporate Bonds / Funds adopting a barbell investment strategy to address volatility and duration risk are preferred over Sovereign Bonds. Still, high inflation, global monetary tightening, and widening fiscal deficit could play spoilsport.

gains vs other DM currencies towards the end. Nevertheless, the USD has held its ground vs the INR. Amidst the rate-tightening environment, the USD should still likely be perceived as a “safe carry” bet. Some noises from the Fed minutes and elsewhere indicate a potentially softer rate hike path – however, looking at a US retail giant’s howler earnings, inflation looks set to stay for some more time. Moreover, the RBI has likely indirectly capitalized on the dollar index weakness towards the end of May-22 and purchased USD despite selling FCA on its balance sheet (non-monetary liabilities have declined more so). Net-net, remain positive on the USD.

Source: Bloomberg Equity/Fixed Income Returns/Yields in local currencies. Commodities in USD. Numbers for Fixed Income are Yields. As of May 31, 2022.